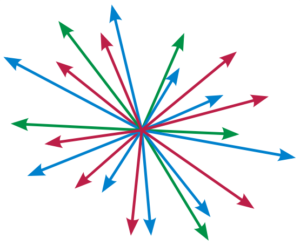 The mathematics professor was closing his lecture with questions and answers. He was asking the questions, French accent, chalk in hand.

“Tell me how do you imagine a vector space before your mind’s eyes?”

Lenny raised a hand, the prof found him. A nod in his direction, “yes?”

“Like a dough. You can stretch and pull it”.

The professor considered this for a moment, then made an impatient gesture.

“No, that is not enough. No. No, a vector space is not like a dough at all! You are speaking like the washerwomen at the market. You must learn to speak like a nobleman!”

Snorts and giggles, quiet expressions of disbelief. The professor was known to be eccentic, but not to bizarre extremes like this.

Another student answered the question satisfactorily.

In the slanting afternoon light, a sprawl of students on the main stairs. Cool air and warm light on our faces. Someone exhaled a long plume of smoke into the sky. Elbows back on the steps, I closed my eyes at the sun, red veins brilliant across my field of vision.

Discussions about the professor’s strange tirade. Lenny’s voice, “He has a medieval mindset! Noblemen and washerwomen!”

Someone else’s voice. “But aren’t you into magic yourself, Lenny? You were telling us yesterday -”

Back and forth. Lenny explained his views about magic in the modern world, quantum effects and a conscious substrate of reality made up large parts of his model.

Heavy steps shuffling up the stairs nearby, the cold of the stone steps at my elbows. Motor noise from below.

“So you people are looking for a flatmate?”

Cigarette smoke laced with herbal scents, the sound of a bicycle switching gears.

“Bea, are you looking for a flatmate?”

I opened my eyes. Lenny, long eyelashes, gaze lowered at my chest. I sat up and he looked away.

“Yes, want to see? Josh will be in later, but you should meet him, too.”

On our way from the university to the flat, we passed through a section of the old town. Lenny talked about magic, describing a medieval ritual he had read about, but which he would never try because it involved an animal sacrifice, of a black cat, apparently.

I was pushing my bicycle over the cobbled streets, he was walking along, gesturing and explaining. When we arrived, I swung open the little cast iron gate and led the way past the overgrown garden and the bicycle shed.

Lenny nodded with an approving air at what he saw. We entered the house and ascended the creaking stairs. Evening sunlight filtered through the colourful glass windows of the stairwell, painting our faces yellow and red. We reached the landing and I opened the flat’s doors.

“To the right is my room, and Josh’s. Here is the kitchen. Would you like some orange juice?” He stood closely behind me as I poured our drinks and we took them to the kitchen window overlooking the shadows of the little courtyard behind the house. There were a few folded garden chairs and a soggy cardboard box with pots and other gardening equipment on the balcony outside the kitchen.

“Sometimes we get foxes trying to loot the trash cans in the courtyard. They even fought one night, maybe a cat or a badger or something, very noisy.” Lenny showed some interest in the wildlife, and we discussed urban foxes as I led him out into the hall and to the vacant room.

“Sue used to live here. She’s moved out of town, to Italy, so we’re looking for a new flat mate. How do you like it? She will pick up the boxes next week – ” I gestured at a stack of boxes next to the door.

Lenny went to the window overlooking the old city below. “Nice view!” he remarked. I told him about the rent, he had no questions about it. “Let me show you the living room,” I said, walking out.

In the center of the living room there stood a large wooden frame. Thin wires criss-crossed the wedge of space spanned by the frame, and delicately glazed ceramic discs were suspended on them. The discs were in motion from the draught through the open window, spinning and touching the strings and wires, generating scratching and humming noises.

Lenny was captivated by the mobile. “What is this?”

“It’s full of vectors, isn’t it?” I teased him. “Josh will be able to explain it better. He is into magic, like you are.” I paused, but Lenny did not launch into one of his lectures. “Anyway, Josh says it is an entire cosmos of worlds and when he needs energy or whatever for his magic, he stops one of the discs. He says it is always the end of a world when he does that. He gets really upset when someone else touches it.”

Lenny had been leaning closer to the sculpture, hand extended towards one of the spinning, humming slivers of ceramic, but he backed away now, eyes wide. “What does Josh do? I mean, is he a student?” he asked.

“Biology,” I nodded. “He is in one of the labs where they do vivisection. He has this method of dissecting a mouse where he first fixes it to a board” – I made a cruciform with my arms to illustrate – “and then injects formaldehyde into a major blood vessel. That way, the heart circulates the formaldehyde … I think it’s horrible, too. But he once told me he gets power from that as well.”

I laughed at Lennys expression. “No, really. Josh is nice! Just don’t talk to him when he comes home before he has a chance to stop the mobile. He is much more relaxed when he can do that.”

Steps and the sounds of the door opening. I called a hello to Josh, who muttered something as he came into the living room. His long, thin hair was hangig in strands to his shoulders, and his broad face seemed slack and tired. He wore a black t-shirt with a band’s name in grotesquely overdone gothic lettering.

I did not speak, and neither did Lenny. After pausing and giving us a look for a moment, he held the biggest disc with the fingers of his left hand, until the mobile quieted down. Then he nodded at us and left wordlessly. Lenny had not moved. After a few moments, running water and the sounds of drops on a shower curtain could be heard through the hallway.

“He’ll be more talkative after taking a shower!” I beamed at Lenny. “Do you want to stay? It’s going to be pizza, I’m afraid.”

But Lenny was leaving, saying some vague things about letting me know. I let him out.

As we were putting our pizzas in the oven, Josh asked, “So who was that just now? Didn’t even want to say hello?”

I shrugged. “Lenny. Looking for a room. From the Algebra course.”

“You know I’m not big on conventions, but not saying hello is a red light. I get enough of that kind of attitude in the computer science lab all day, I don’t want it all evening as well.”

“He is a bit strange, but we need to find someone for Susan’s room.” I set the alarm for the pizzas.

Josh shook his head. “We will find someone else a bit higher on the social aptitude scale. Speaking of social aptitude, when is Susan going to get her stuff? That mobile is driving me insane! Can’t we just put it out on the balcony?”

Bonhomme (AKA Mr. Nice Guy) is a fledgling bodhisattva emanating from the spheres of the Enochian Antifa. He likes to perform magickal acts foraying into moral courage, the ceasefire line between surrender and control, stereotypical foundations of identity, and general well-being & true happiness. View all posts by Bonhomme