After the referendum vote for the UK to leave the EU, I was concerned about what it signified about us as a people and what unpleasantness might follow, as much as I was about the result.

Sure enough, the result gave the green light to every Nazi mouthbreather in the land in following the liars, hypocrites, fascists and Little Englanders of the Brexit campaign out into the sunshine to spread their poison. There was every chance that England would drag the rest of the British Isles into the mire.

Apart from gloom and impotent rage, both, I believe, very ready and understandable responses to such a situation, I was casting around for things to do about it. What difference could I, a lowly, jobbing Chaos magician, raised on offal and coal smogs, make to these circumstances?

Then, out of the gloom and demoralisation, interesting things started to happen. On the bus into work (neither a magic bus nor a cat bus, sadly, just an ordinary bus, but click on the picture to see, with thanks to Hayao Miyazaki, the Magic Cat Bus)â€¦

â€¦I was reading about St Nicholas of Torentino, 13th Century ascetic and badass, in Gordon White’s excellent recent book The Chaos Protocols (if you buy one chaos magick book this year…). This particular St Nick made it his mission to shepherd the souls about whom everyone else had forgotten. Onwards to the Anima Sola phenomenon, the Lonely Soul awaiting deliverance…

…and the Anima Sola prayer. It was a good bus journey.

My first session that morning began with my counterpart declaring, “England is a broken soul.” He went on to raise the question of what happens to the souls who no-one remembers or cares about, and who need rescue. Coincidence? Letâ€™s say synchronicity. The air thickened, as it does when magick is abroad.

A focused hypnogogic excursion guided me towards Hermes, herald of the gods and psychopomp, as an additional change agent needed to lead England out of this life cycle and into the next phase.

And so after a reconnaissance Gabriel and I set out one evening for a sunset procession on one of England’s old Corpse Roads. We processed from the start of the corpse road (an old coaching house) to its end (an old Norman church on an ancient site), to an improvised altar on which to fix our candle for the anthem and closing prayer. We processed for an hour as night approached, chanting the Anima Sola prayer in turn, and arrived at the church just after dark. 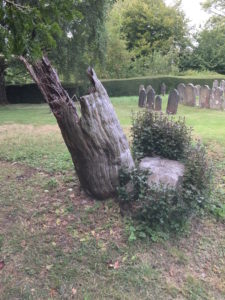 On arrival at the church we lit our candle on the altar, sang Jerusalem, said the closing prayer, put the candle out and Gabriel said “It is done.” At which point the lights came on outside the church, which had hitherto been in darkness. Plainly someone inside the church, but it was one of those moments.

It so happens that Gabriel and I were born in England, but that is not a prerquisite. Wellwishers from other parts of the British Isles, Europe and the rest of the world are welcome to help. She’s your Albion too, and she needs all the help she can get at the moment. The emphasis throughout is on the will of the ordinary citizen to affect change. It’s not going to be the politicians who get us out of this one. It never is, is it?

Things you will need

How to do it

Congregate at the start of the Corpse Road/Ghost Road or equivalent.

The congregation gathers and Fanfare for the Common Man is played

The Statement of Intent

â€œIt is our will that our Albion is healed.â€

â€œAlbion, hear us! It is our will that you are healed through our prayers!â€

Hermes I call, whom fate decrees to dwell near to Kokytos, the famed stream of Haides, and in Ananke’s dread path, whose bourn to none that reach it ever permits return.

O Bakkheios Hermes, progeny divine of Dionysos, parent of the vine, and of celestial Aphrodite, Paphian queen, dark-eyelashed Goddess, of a lovely mien; who constant wanderest through the sacred seats where Haides’ dread empress, Persephone, retreats; to wretched souls the leader of the way, when fate decrees, to regions void of day.

Thine is the wand which causes sleep to fly, or lulls to slumberous rest the weary eye; for Persephone, through Tartaros dark and wide, gave thee for ever flowing souls to guide.

The Procession of the People

The congregation chants the Anima Sola Prayer as they process:

â€œHear ye O Mortals, the lament of an imprisoned soul, alone and abandoned in an obscure dwelling.

O Lone Soul, a soul of peace and of war.

Soul of sea and of land, I desire that all thatÂ I have lost be returned.

O Souls, you who are alone and abandoned, I accompany you in your grief. Pity upon you I have, for I know of the grief and suffering you must endure within your harsh and long imprisonment. I offer you this prayer and glass of water because I desire to lessen your pain and quench your thirst.

I offer you this lit candle so that you may find your way into the light.

In this moment I offer to you my meritorious labour, and all that I have suffered, suffer and will suffer in this life, can never compare to yours.

I humbly pray that you finish paying for your mortal sins of the flesh so that you may find the grace of God, and be lifted from your imprisonment.

With your grace you shall be my benefactor.

Celebrant 1 sets the candle on the altar, Celebrant 2 lights it. The congregation sings the anthem:

â€œAnd did those feet in ancient time,
Walk upon Englandâ€™s mountains green:
And was the holy Lamb of God,
On Englandâ€™s pleasant pastures seen!

And did the Countenance Divine,
Shine forth upon our clouded hills?
And was Jerusalem builded here,
Among these dark Satanic Mills?

I will not cease from Mental Fight,
Nor shall my Sword sleep in my hand:
Till we have built Jerusalem,
In Englands green & pleasant Land.â€

â€œWould to God that all the Lordâ€™s people were Prophets.â€